GLENELG
Glenelg could welcome back two talented key position players for its blockbuster against Norwood on Sunday.
Duall U18 All-Australian Will Gould has returned from captaining the Torrens University SA U18 team while high-flying Josh Scott was a late withdrawal from the Tigers’ Round 12 win against the Eagles.
They have been joined in the Bays’ 25-man squad by teenager Finn Betterman and Launceston recruit Rulla Kelly-Mansell.
With seven players on the extended interchange bench, it must be trimmed by four before the bounce.
League
F: Reynolds, McBean, Close
HF: Scharenberg, Schott, Partington
C: Chalmers, Snook, Bradley
HB: Joseph, Curran, Motlop
B: McCarthy, Proud, Uebergang

Bays to continue on their winning ways with a win over the up and down Legs.

Both the defence and attack of the Tigers are looking strong and Partington is having a purple patch of outstanding form. Tigers by 4 goals at home. 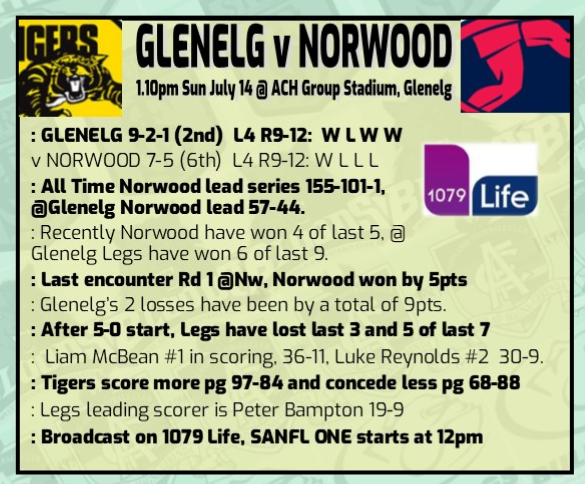 Underestimated the final margin. Tigers much too good in the second half and ran over Norwood. Redlegs looked disinterested from half way through the third. In the atrocious weather I can understand why, it was somewhat wet and cold in the outer.