Sturt v Adelaide | Peter Motley Oval | 2:10pm
Live broadcast on 1629 SEN SA or the SEN APP
Live stream via Digital Pass sanfldigitalpass.com.au
Live radio/scores/stats on the SANFL App | Live scores/stats at sanfl.com.au
STURT
Sturt has named premiership defender Byron Sumner ahead of schedule for its match against Adelaide on Saturday.
Sumner, who copped a jaw injury against Port in Round 9, was initially expected to miss four weeks but could return a week earlier if he takes his place in the final 21.
The former Sydney Swan is one of three inclusions for the Double Blues’ 23-man squad, with tall forward Hugo Munn and utility Joel Thiele also earning a call up.
Munn has been named to start at centre-haf forward while Thiele, named on the extended interchange bench, could play his first Statewide Super League game of the year after playing 10 in the Reserves for 2019.
League
F: Greenslade, Patullo, J. Hone
HF: Riley, Munn, Sutcliffe
C: Pearce, Colquhoun, Crocker
HB: Stephens, Edmonds, Sumner
B: Illman, F. Evans, Carey

J Thiele might be making his debut for Sturt
Congratulations if so
Any info on what position/positions he plays ?

Scrappy wrote:J Thiele might be making his debut for Sturt
Congratulations if so
Any info on what position/positions he plays ?

Not Joel Thiele's debut - he has played 19 senior games for Sturt, through defence and midfield.

There is still time for the other J Thiele to make his debut, however. 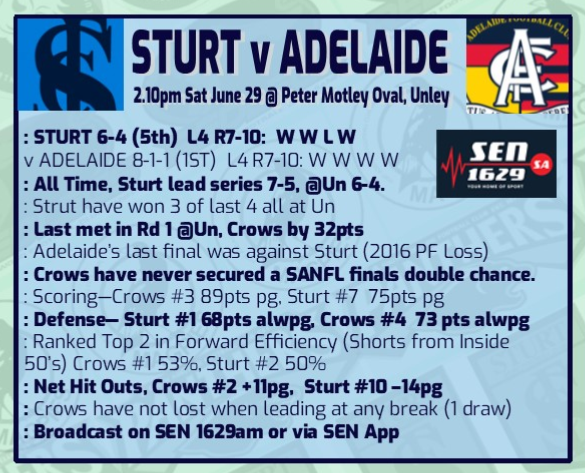