Friday 7.20pm
Can the Bloods bounce back at home or will Sturt move on up?

West Adelaide v Sturt | City Mazda Stadium | 7:20pm
Live stream via Digital Pass sanfldigitalpass.com.au
Live radio/scores/stats on the SANFL App | Live scores/stats at sanfl.com.au
WEST
West Adelaide has swung the changes ahead of its match against Sturt on Friday night.
Premiership captain Chris Schmidt will miss at least six weeks after injuring his knee against South in Round 6 while defender Lachlan Evans and forward Mason Middleton have been dropped to the Reserves.
Former Redleg Lyndon Hupfeld will be given an opportunity to fill Middleton’s absence while former Richmond rookie Gibson Turner returns to provide a spark inside 50m.
Journeyman Nigel Osborn will get his richly deserved Statewide Super League debut after being named on the wing.
The 28-year-old has played in various locations including the CMS Crows and Mallala while also representing the SA Country team on multiple occasions.
Key utility Chol Majok and speedster Murray Waite have also been named in the 23-man squad. 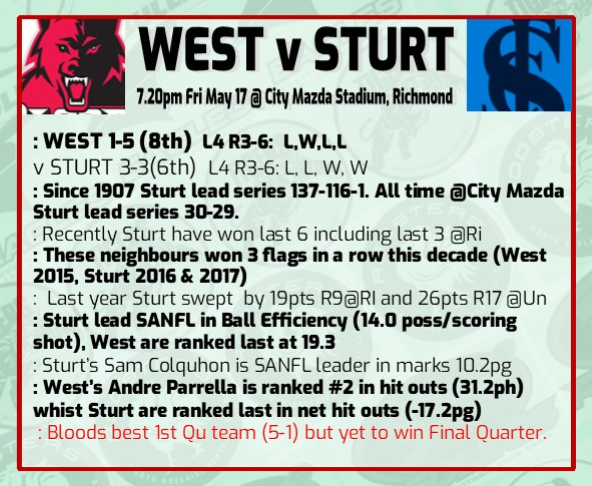 Surprised Middleton has been dropped. I was impressed with his form last year as he appeared to be a strong marking forward whenever we played Westies.

Double Blues to sneak hone by a goal