Can the Roosters knock off Sturt on home turf?

Big ask for the Roosters who haven't recaptured their 2018 form. Double Blues should be too strong at home.

NORTH
North Adelaide could have as many as two RAA Rookies play against Sturt on Saturday.
Key defender Dyson Hilder (18, 195cm and 90kg) and small forward Frank Szekely (19, 177cm and 68kg) have both been included in the Roosters’ 22-man squad.
Hilder is a talented key position player who has also been selected in the Torrens University SA U18 squad while Szekely must survive the cut after being named on the four-man extended interchange bench.
Wingman Brayden Kirk has been named for what would be his first League game of the year while Jared Deep was sent back to the Reserves.
Defender Jake Wohling is unavailable due to concussion.
League
F: Verity, Harvey, Agorastos
HF: Hender, Ramsey, Miller
C: Olekalns, Tropiano, Allmond
HB: Laurie, Smith, Spina
B: Hilder, C. Craig, Slee 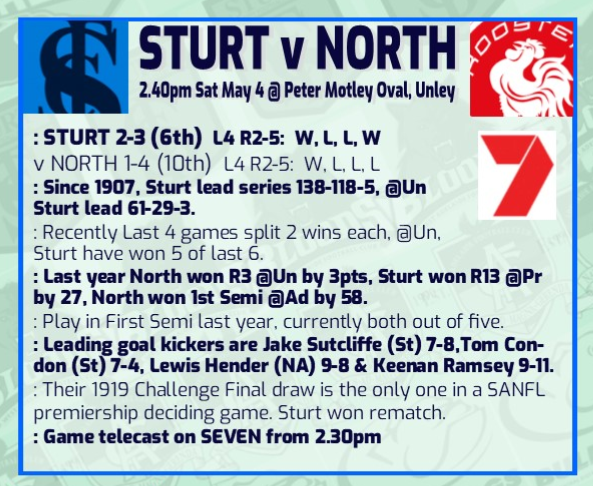