Should be a beauty, undefeated South with the best percentage in the league against third placed Glenelg who has the second best percentage thus far in the season, if we all put in like last night then we’ll be fine & will get the job done & I’ll predict a 21 point win at home

South will get the chocolates here- the battle of the cats down at the Litter tray. Milestone game for a club favorite too!

Flying with confidence and playing some very good football.

200th for Crabby and think the boys will get up for him.

Should be a cracker of a game !

Promises to be a good contest.

Crabby is a legend. As a dour backman in my short lived playing days I have great respect for his ability, longevity and loyalty.

Remember that peculiar period when Fuller tried to turn him into a CHF?

Reflects how poor we were at the time.

South and the Bays to meet for the second week in a row in the twos. Not ideal, but a quirk of the current arrangements.

Crabby is a legend. As a dour backman in my short lived playing days I have great respect for his ability, longevity and loyalty.

Remember that peculiar period when Fuller tried to turn him into a CHF?

Reflects how poor we were at the time.

South and the Bays to meet for the second week in a row in the twos. Not ideal, but a quirk of the current arrangements.

Congrats to Crabby though, one of the clubs great characters and a good honest player. Crabby was never blessed with as much talent as others , I'm sure he'd admit that , but he's made up for it with loyalty ,desperation, a great attitude and durability. To top that off you probably would'nt meet a nicer fellow as well. He's also got a very good sponsor as well.......

Tigers at home will win this. Forward line looks too strong for South lead by McBeanpole. The Tiger defence with Proud, Curran, Josep and Bradley are working as a tight unit and should shut down the panther attack.

GLENELG
Glenelg could regain a pair of star midfielders when it hosts South Adelaide on Saturday.
Former West Coast Eagle Luke Partington has been named on the five-man extended interchange bench after missing Round 2 with a minor hamstring complaint.
As has stoppage king Matt Snook, who has played the past two matches in the Reserves to build match fitness after having a restricted preseason due to groin soreness.
League
F: McCarthy, Scott, Reynolds
HF: Betterman, McBean, Close
C: Gregson, Motlop, Nicholson
HB: Joseph, Gould, Scharenberg
B: Curran, Proud, Chalmers

SOUTH
South Adelaide will have a debutant when it travels to face Glenelg on Saturday.
Mature-age forward Kyle Emery will play his first Statewide Super League match after being named in the forward pocket.
The 22-year-old from Palmerston FC in the Northern Territory kicked four goals and had 19 disposals in the Reserves last round.
He has been joined in the Panthers’ 23-man squad by tall utiility Jesse McKinnon, who may be included as a replacement for forward Sam Overall who is in doubt with a groin strain.
South defender Bradley Crabb will play his 200th Statewide Super League game after making his debut in Round 20, 2007.
Fellow backman Tyson Brown will play his 50th Statewide Super League match.
League
F: Emery, Whittlesea, Sampson
HF: Fitt, Cailotto, Schwarz
C: Irra, Cross, Karpany
HB: Haines, Haren, Brown
B: Rose, Crabb, Summerton

Have to respect the perseverance shown from Brown to reach 50 games. When fit is a very handy runner for us. 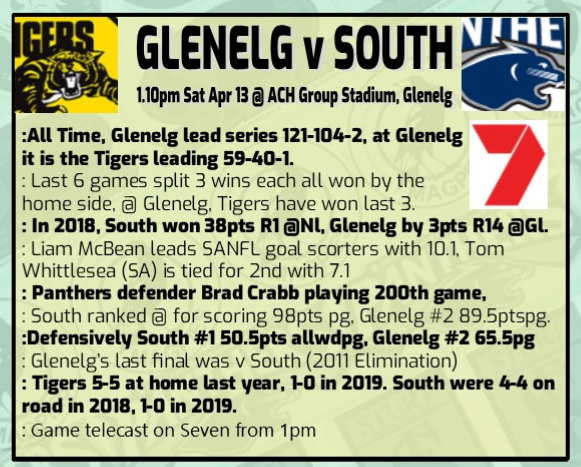 Bitterly disappointing result. 23 shots on goal to 8 at 3/4 time, game should have been over as a contest by then.

So very frustrating. Dominated the first 3.5 terms, with a 35 pt lead flattering the Bays. Then South basically went 20 minutes without touching the ball and watched the Bays squander countless opportunities to win the game.

Liked the games of Schwarz, Davis, Overall and Irra. Horrible arm/wrist injury to Josh Scott in the last quarter after he landed awkwardly.

So which team should be happy with the draw ?
GL for coming from 35 points down to draw
SA because GL had 4 late chances , for 3 points and an out on the full, and should have stolen the win

In the context of whats happened , I look at it this way
The bookies had GL favorites
I think most pundits tipped GL to win this match
I thought at home GL  would win
Because this game was played at Glenelg Oval, I think perhaps SA are marginally  better off with the draw

Terrible injury to Josh Scott, with the broken right arm.

Could hear him yelling in agonising pain through the Channel 7 effects microphone.

Good luck in the recovery, Josh.

Is a big blow to the Bays.