I reckon the last 3 times the teams have played  at Norwood Oval , Norwood has won
Glenelg appear to be stronger this season, Norwood slighty weaker
Glenelg won the last 6 games last season, thats  because they didnt play Norwood ...
Norwood had a dynamite 2018  minor round  then were runners up for the season

Of great interest if both play is the switcheroo players
Discounting AFL stints
Luke Partington, Norwood to Glenelg
Dom Barry Glenelg to Norwood
I think Norwood might be better off in the short term, in the long term I think Glenelg might be

Will it be a shootout, or will the baymen make it a scrappy encounter ?

Live radio broadcast on 1629 SEN SA or the SEN APP
Live stream via Digital Pass sanfldigitalpass.com.au
Live scores at sanfl.com.au & SANFL App
NORWOOD
Norwood will add plenty of pace to its line-up to confront Glenelg at The Parade.

Former Bays wingman Dom Barry (25, 179cm and 78kg) will face his old side from a half-forward flank after being delisted by Port Adelaide in the off-season.

Ex-Panthers forward Cody Szust (22, 183cm and 75kg) will also don the red and blue for the first time after being named on the extended interchange bench.

Key defender Michael Talia will continue his progression from a back injury by starting in the Reserves.

GLENELG
Glenelg is set to unveil star recruits Luke Partington and Cory Gregson against Norwood at The Parade.

Partington, from West Coast, and Gregson, from Geelong, have been named in the 23-man squad to face the Redlegs.

Key forward Liam McBean and and defender Brad Agnew will return after a year overseas while former North Adelaide linkman Michael Virgin is on the extended bench.

Fearless midfielder Matt Snook will start in the Reserves after being hampered by a groin complaint this pre-season.

Tough one to call with both sides expected to fare OK this season. Norwood will want to avoid their slow starts because I think the Tiges might make them pay if that happens. Hard to see anything other than a tight contest. I’ll go Bays by 14 points 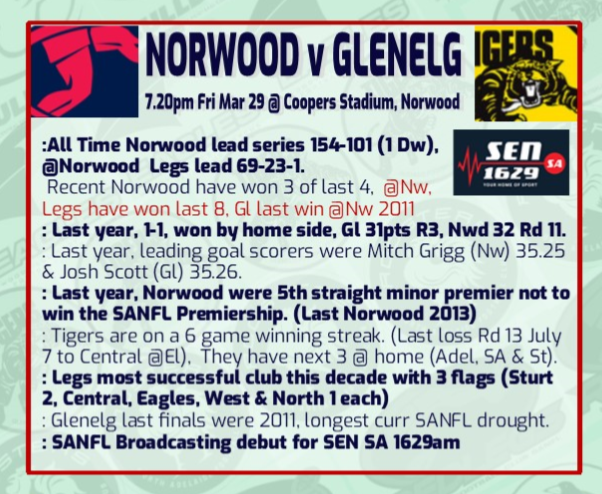 Good stat Scrunch
So if we have a  no top no flag logic, the side that could benefit this season is North Adelaide who are starting on -4 points ....

Aaaand we are off and racing. Bays to continue their winning streak with a 5 point win at the Parade.

havent won at the parade since 2011 iirc, tough first up assignment, norwood in a tight on

was right, damn it

Had a giggle listening to the SEN commentary
" Magriggarey Medal. "

Disappointing not to hold on. Had a late chance to take the choccies but couldn't convert. Bays need to win the close ones if we are going to play finals.