PhilH wrote:Tram Boy ....  here is what happens if count comes to 18

5.5.4 Correct Number and Request Without Merit
Where a count reveals that the opposing Team has the permitted
number of Players on the Playing Surface, the following shall apply:
(a) a field Umpire shall award a Free Kick to the captain or acting
captain of the opposing Team, which shall be taken at the Centre
Circle or where play was stopped, whichever is the greater penalty
against the offending Team;
(b) a Fifty-Metre Penalty shall then be imposed from the position
where the Free Kick was awarded; and
(c) if a field Umpire is of the opinion that a request was made under
Law 5.5.1 primarily to delay play or such request did not have
sufficient merit, the field Umpire shall report the Player who
requested the count for Time Wasting under Law 19.2.2.

Phil, what about the Laws Of Australian Football:

Scrappy wrote:Agree TB
And do it this week
Otherwise, and this is a proverbial longshot ,  there is a  potential for this to happen again in the G/F

What happens next week SANFL says it's an Eagles v Norwood GF
North are in the seconds GF
What happens to Eagles fans will North fans have a riot ?

Why would the SANFL say it next week ? What are you you on about ?

What do you mean what happens to Eagles fans ?

This is going on longer than Gwen Meridiths’ famous radio serial

You seem strangely familiar Tram Boy, like an old friend.

Trying to do my weekly stats report and prepare the SANFL ONE GF Pre-Game show .. bit tricky without knowing the match up.

Still thinking that to give both teams a chance rather than some bozos making a decision is to let them play the last term again starting with the three quarter time score........

Round 1 next year should have a North v Eagles match scheduled, perhaps a stand alone well promoted night match at the Adelaide Stadium to boot

Thank you very much. I have invited the media in because I think it is important they hear the actual words of my decision.

In this most difficult matter I make it clear from the outset that I do not have the power to order a rematch or annul the score. The range of penalties available are censure, a fine not exceeding $10,000, loss of premiership points for next year and reversal of the result.

Having heard arguments and evidence I find that the North Adelaide Football Club was grossly negligent in allowing for a period of some 3 and half minutes 19 men to be on the field during that time they scored 1 goal and 2 behinds and eventually won the match by 5 points. Their various explanations as to how this came about were unsatisfactory and confusing; however, I find that the decision that they indulged in was not deliberate. It was due to negligence.

I am of the view that it would be unrealistic to expect the Woodville West Torrens Football Club through their captain to ask for a count on the day and my decision should not factor in the fact that that was not done.

That is a very anachronistic law that really doesn’t apply today and has been overtaken by technology, because there is no doubt that there were 19 men on the field and that a count would not be necessary.

To me a rematch would seem to be the most superficially appropriate penalty, but I have no power to do so and would have of course caused potential prejudice to the Norwood Football Club who are waiting to play the grand final.

Faced with this dilemma I am of the view that as this was not deliberate a reversal of the result is too savage a penalty and the matter should be dealt with by way of fine and loss of premiership points for next year.

Sadly, this is of little consolation to the Woodville West Torrens Football Club.

I fine the North Adelaide Football Club the maximum amount of $10,000 because this was grossly negligent and by way of deterrence and I dock them the loss of 4 premiership points for next season.

That is my reasons. 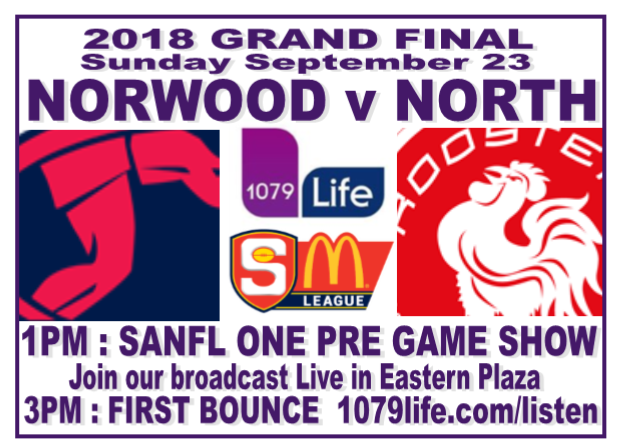 I think the sanfl & their judge got it wrong. There is a total disconnect between the penalty and the game in which they broke the rules. Agree the Eags shouldn’t have coughed up such a big lead but maybe playing on equal terms for the first 5 minutes of the last 1/4 might have meant North didn’t score for that time and possibly the Eags score and halt the North momentum. Nick Giles said that they alerted the 4th umpire and the steward but neither did anything and Luke Powell said that the 19th man was running off the ground as they were about to send the message out.
Why if a player breaks the rules and is suspended do they miss the next game but here North breaks the rule, is found guilty, scores more than the final difference during the time that they are breaking the rules but gets to play next week and take their penalty during the next home and away season? However- move on- saves me some plane fares and frees up my weekend I guess.

There are no winners in this....as I’ve said whoever got to play Norwood will be mentally shot & I’d expect Norwood to win by at least 8 goals & probably substantially more....I cannot understand why replaying the last quarter is an option that is unavailable

Honestly with the BS for breaking the rules fine . I was talking with my son if North don't win the flag , they may well be screwed for 2019.

Eagles blew the lead can't deny that .
But at least the Eagles didn't cheat to win.
For myself the Eagles need to make some big changes before 2019.
That could mean more players that aren't too old and changes in the coaching team.

I’m a staunch sanfl man & as such it leaves a sour taste so how can there be a winner in all this, Whatever happens, this year will be tainted forever

Ps, I’m glad they made their own decision & not listened to those over the border which they usually do

Short term - we will find out Sunday.

A 10k fine for a team that has clearly cheated it’s way into gf. West and south have 50k taken off their salary cap because they are doing it tough financially....both sound rational decsions

Different game but when discussing cricket rules my great friend lee always points to the rule that identifies the spirit of the game comes first.

IMO, whilst this decision meets legal needs and, as noted by the learned man, he was limited in his actions this decision is clearly against the spirit of the game of football and is a legal yes but very disappointing decision that sets a strong precedence for teams to breech the rules and then claim negligence.

One question..not sure how it works. If North are deprived of 4 premiership points next year...when are the points deducted? First 2 games? at the end of the season? and what about percentage v the opponents in those 2 games?

Another point, the SANFL couldn't make a decision themselves, had to go to a retired Judge to cover their a***s. A vote of no confidence against the SANFL Commission is needed from delegates representing all SANFL clubs (apart from North

) is warranted, just my opinion.

Ok I think it is a weak decision by the sanfl. A least disruptive decision rather than a fair one.

So whilst the loss of 4 premiership points is a significant penalty, a $10,000 fine is just a spit in the bucket. It is no deterrent in my view.

However, clearly the penalty does not apply to the game in hand.
Therefore, it is manifestly unfair to the Eagles.

Sanfl CEO Jake Parkinson said on radio this morning that to deny North a GF would have been unfair. Was it unfair that North kicked 1 goal 2 points whilst having 19 men on the ground?

I think the most logical decision would have been to strip North of 8 points they scored during the 3 minutes 39 seconds of infringement.

Basically, what the sanfl has come up with fails the pub test in my opinion.

Not my preference but if they are going to dock North 4 points, they should be the 2 games against the Eagles. I bet the Eagles would rather a GF than 2 guaranteed wins in 2019 however. The Eagles are the big losers.

It just seems to me when faced with difficult decisions, the sanfl constantly takes an easy route, rather than a fair one. They are fast following the AFL's path of metered justice. And as always, the integrity of the competition seems the first thing out the window.

You can bet your house that the rules surrounding this will not be the same in 2019.

Yeah i think the Eagles are hard done by, Nearly 5 min with an extra player is a big advantage.Still look forward to this Gf as after the amount of media in last couple of days everybody in this state should know its on.

Can West have the 4 Premiership points that North are losing please?

I never ever thought I'd say this but I hope Norwood tear the onfield cheats up.
And every side next year beats them in every game

Chambo Off To Work We Go wrote:Ok I think it is a weak decision by the sanfl. A least disruptive decision rather than a fair one.

Agree, I think they should have taken the game off North.
The penalty is very weak, $10,000 will be covered by the beer sales after the GF.

Eagles have the right to feel very miffed.

But to digress, it covers up a huge choke by the Eagles. They had the game in hand and let North run all over them.

Chambo Off To Work We Go wrote:Ok I think it is a weak decision by the sanfl. A least disruptive decision rather than a fair one.

Agree, I think they should have taken the game off North.
The penalty is very weak, $10,000 will be covered by the beer sales after the GF.

Eagles have the right to feel very miffed.

But to digress, it covers up a huge choke by the Eagles. They had the game in hand and let North run all over them.

The last section we Eagles fans have been talking about it this year .
Something needs to change
A Younger players maybe
B maybe some changes in the coaching team..... Whatever that entails.

Either the players aren't fit and can't play after 1/2 time. Or the Eagles need Younger quicker players.
Or Godden coaches great first half of the year and his plan stops working towards the finals .

Just My thoughts I could be a million miles off the mark .

His plan seemed to work for nearly 3 quarters pretty well.

Perhaps the Eagles players thought it was all over and eased off too early, lost momentum, then couldn't get it back for various reasons.