Two sides well out of finals contention at the moment face off to keep their slim finals hope alive. Who's door will creak slightly more ajar this week?
_________________
Only a Cornes could get outraged over that

Hopefully we play the SAME WAY we did against South it was good to watch and not revert back to kicking sideways and backwards.

I'm pretty sure the Tigers can play you back into for. Our record at Elizabeth is poor and can't really see it changing this week. 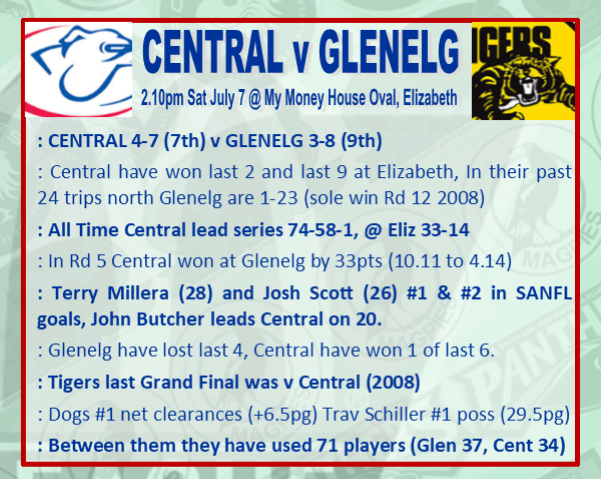 Another frustrating game to watch,just glad we won.
Footy is becoming extremely boring to watch

Wasn't exactly a showcase for Aussie rules footy but at least it was close. If Motlop's kick had gone straight the Bays would have won which I would have happily taken.

The siren sounded just as Goodrem couldn't quite reach the kick-out (there was one second left when the last behind was rushed). Snook and Amato were closing and either one of them would have been able to pick up the loose ball and have a shot from 30m with another five seconds on the clock.

If you re-wind one minute, Motlop marks 55 from goal with 39 seconds left on the clock. Unlikely to make the distance from about 60 odd metres out, he still wasted 38 seconds lining up for goal which his shot not only missed to the left, but predictably fell short by five or so metres and was rushed through. Watching the replay, I feel sorry for Bays fans. It was just a lack of game awareness and silly. Fair enough to take all the time in the world when you're 10 metres out straight in front, but when you're a 1% chance of scoring, why would you be wasting so much time??! Crazy.

It was Habel with the kick out, who had been pretty much going long all game, who missed Kyle Jenner on the kick out.

To be fair though I only saw it on the Digital Pass replay that zooms out as Jenner goes to mark the ball and it spills over the top. Frankly my player ID level of all league/reserves players probably smashes 99.9% of people on here so I'm not too fazed, and who the Dogs players were was irrelevant to my original point though which is Motlop shouldn't have taken as long as what he did when taking the shot for goal as it was so low percentage. Fair enough to go for it and players have their routine and it takes time and what not, but it's about game awareness. That 38 seconds of lost time needed to be 20-25 seconds. Easier to say in hindsight but still. He had to consider the 99% chance that if it fell short or missed (which it basically did both), Glenelg needed as much time as they could get to score. And we all know SANFL quarters don't go 30 minutes like the AFL so once it was creeping up to 27 minutes, the Bays were already on borrowed time.

Actually I don't know why I care. I don't like Glenelg!