Both sides come into this match in winning form. Who will extend their winning streak?
_________________
Only a Cornes could get outraged over that

Eagles at home will be too strong for the legs. Got too much strength all over the ground and will coast home by 5 goals.

Norwood upstaged the Eagles twice as underdogs last season including a decent touch-up at Oval Ave. I suspect that's where the good news ends for Legs fans though, as UH said, Eagles too strong at home.

Woodville-West Torrens will have a familiar face resume in the Reserves against Norwood on Saturday.

Star midfielder Jared Petrenko, who has been involved with the Channel 7 TV program House Rules, has been named to gain match fitness in the seconds.

The former Crow has missed a portion of the pre-season and the first six rounds while filming on the show.

In the Macca’s League side, midfielder James Boyd has recovered from a knee injury while Jordan West has been named on the extended interchange to potentially play his first League match this year.

Co-Captain Pat Giuffreda will play his 150th Macca’s League game after making his debut in Round 13 2007. 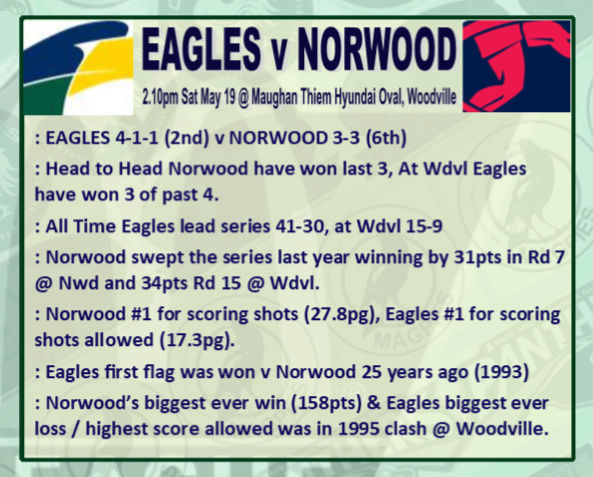 The Legs too good on the day or the Eagles didn't turn up?

This is the 4th paragraph sent by email to me from the Norwood Football, Club

* The first quarter in its entirety was a sCrApPy affair, with both sides making errors with both hand and foot.*

Have to agree with that summation
NW improved and  played  at times some brilliant footy after the first Stanza
WWT, uncharacteristicly made too many boo boos all day

I was there like all or anyone who talked to me.
Why did the coach drop Borholm and Grey
Some conjecture over Boyd coming straight back in .
Now we can surmise West came in to help hold up Norwoods ruck man . What actually happened no Borholm if he was on the ground he becomes a focal point he wasn't there . So how can we say this no beacon no player to go to.
Honestly Norwood were faster and could kick goals.
Eagles were like this against North turned it on for Sturt and went back to sleep .
Believe me not happy Jan
I was contemplating just going fishing hehe