North are up and about, knocking off Sturt, while Norwood were knocked off by Glenelg. Will North continue their great form, or will Norwood cause a bit of an upset?
_________________
Only a Cornes could get outraged over that

North to win, which I would have not predicted at the start of the season. They have played really good footy so far this year and look to have too much speed for the Legs. Roosters by 22 points. 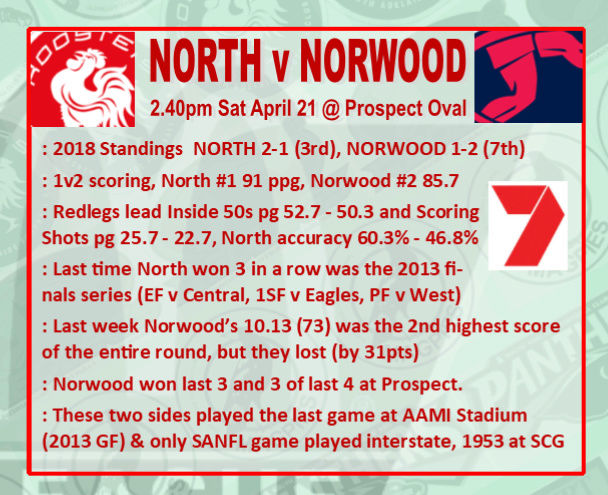 Well done, great win u Cockaleeeeachies, 3 in a row

As ordinary as Norwood are, it was the complete opposite for North - They looked very impressive.

North have surprised everyone. No one expected this standard of football In retrospect the biggest shock is what happened at Elizabeth in the first game. The way North are playing you would have thought the big ground would have suited their style.
The North recruits Allmond, Tropeano and Young have been fantastic.
One question the North hierarchy will have to address shortly is whether James Craig comes back in to lead the rucks when he is fit. Barns and Harvey are getting beaten in the ruckwork but are much more effective than their opposing ruckmen around the ground.
North also looked a lot fitter than Norwood yesterday.

A play of the day
19th minute mark, 3rd quarter
For more reasons than one, some North Adelaide barrackers would have rellay enjoyed this passage

Lewis Johnston marks the ball and has a set shot for a goal , about 50m out from goal
For some strange reason, some spectators in the crowd started booing Lewis Johnston
Some regard him as a great kick for goal , I have to agree, but I consider Matthew Panos is just as good

Lewis Johnston scores a point
Mitch Clisby takes the kick off , and his kick goes forever, and lands in the centre square
Wow, now thats a dobbsy and a half
This kick in was a mammoth
Lewis Hender takes a spectacular mark , as he is falling back to planet earth , he handballs to Alex Barns
Ive seen similar marks and handballs a few times in the 1970s by another North Adelaide footballer
Alex Barns passed the ball to Leigh Ryswyk, a player who almost played for Norwood when he came over to Adelaide
Leigh Ryswyk squares the ball up, with a magnificent drop punt , to Robbie Young OTR
Robbie Young does not even have to break stride, runs into an open goal and scores 1 of his 6 goals for the match

That was a keg of beer football !