Norwood started their season off with a loss to Sturt, while South got the job done over a disappointing Glenelg. Who will get the two points on Sunday?
_________________
Only a Cornes could get outraged over that 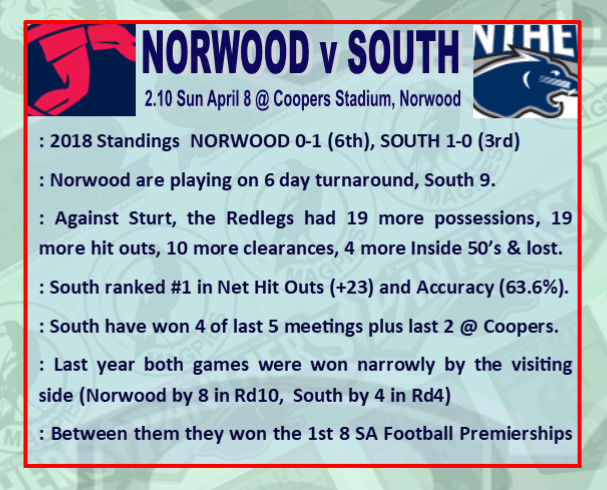 Love that stat on the last line !
The stat snippets are great reading
Keep up the good work Phil

Worst performance I've seen from a South side since the Fuller days. We were reasonable early, but you could see heads drop when we managed 1.9 in the second quarter after having most of the play. Most of them easy set shots from inside 40m.
Some of our "Name players" were found wanting, the five or six kids were ..well....inexperienced and are yet to come to terms with the pressure, physicality and tackling applied by a gang of ex AFL listed players. Not sure what was happening at the centre bounces but in the second half Norwood waltzed away with the ball time and time again, perhaps standing shoulder to shoulder with an opponent could help?
I would be expecting South to drop 3-5 players for next weeks match.
South were terrible. Norwood were good but not that good.